The bullish engulfing pattern is a two candlestick pattern which appears at the bottom of the down trend. As the name suggests, this is a bullish pattern which prompts the trader to go long. The two day bullish engulfing pattern is encircled in the chart below. The prerequisites for the pattern are as follows:
The prior trend should be a downtrendThe first day of the pattern (P1) should be a red candle reconfirming the bearishness in the marketThe candle on the 2nd day of pattern (P2) should be a blue candle, long enough to engulf the red candle

The thought process behind the bullish engulfing pattern is as follows:
The market is in down trend with prices steadily moving downOn the first day of the pattern (P1), the market opens low and makes a new low. This forms a red candle in the processOn the second day of the pattern (P2), the stock opens near the closing prices of P1, and attempts to make a new low. However, at this low point of the day there is a sudden buying interest, which drives the prices to close higher than the previous day’s open. This price action forms a blue candleThe price action on P2 also suggests that bulls made a very sudden and strong attempt to break the bearish trend and they did so quite successfully. This is evident by the long blue candle on P2The bears would not have expected the bull’s sudden action on P2 and hence the bull’s action kind of rattles the bears causing them some amount of nervousnessThe bullishness is expected to continue over the next few successive trading sessions, driving the prices higher and hence the trader should look for buying opportunities
The trade set up for the bullish engulfing pattern is as follows:
The bullish engulfing pattern evolves over two daysThe suggested buy price is around the close price of blue candle i.e on P2Risk taker initiates the trade on P2 itself after ensuring P2 is engulfing P1The risk averse initiates the trade on the next day i.e the day after P2 around the closing price, after confirming the day is forming a blue candleIf the day after P2 is a red candle day, the risk averse trader will ignore the trade, owing to rule 1 of candlesticks (Buy strength and Sell weakness)On a personal note, in multiple candlestick patterns where the trade evolves over 2 or more days it is worth to be a risk taker as opposed to a risk averse traderThe stop loss for the trade would be at the lowest low between P1, and P2
Needless to say, once the trade has been initiated you will have to wait until the target has been hit or the stoploss has been breached. Of course, one can always trail the stop loss to lock in profits.
Have a look at DLF’s chart below; the bullish engulfing pattern is encircled. 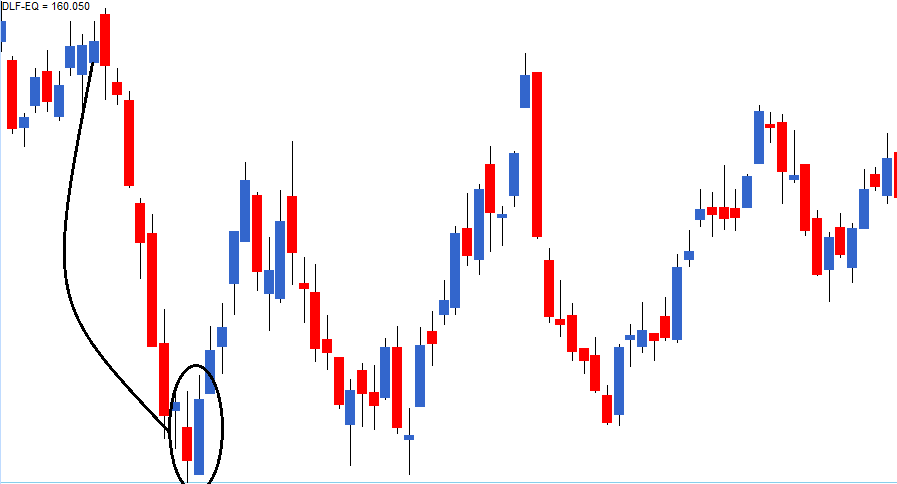 Posted by tamiltrading at 6:24 AM