The paper umbrella is a single candlestick pattern which helps traders in setting up directional trades. The interpretation of the paper umbrella changes based on where it appears on the chart. 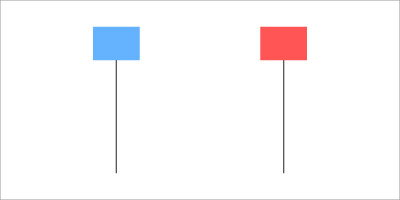 The bullish hammer is a significant candlestick pattern that occurs at the bottom of the trend. A hammer consists of a small real body at the upper end of the trading range with a long lower shadow. The longer the lower shadow the more bullish the pattern.
The chart below shows the presence of two hammers formed at the bottom of a down trend.

Notice the blue hammer has a very tiny upper shadow, which is acceptable considering the “Be flexible – quantify and verify” rule.
A hammer can be of any color as it does not really matter as long as it qualifies ‘the shadow to real body’ ratio. However, it is slightly more comforting to see a blue colored real body.
The prior trend for the hammer should be a down trend. The prior trend is highlighted with the curved line. The thought process behind a hammer is as follows:
The market is in a down trend, where the bears are in absolute control of the marketsDuring a downtrend, every day the market would open lower compared to the previous day’s close and again closes lower to form a new lowOn the day the hammer pattern forms, the market as expected trades lower, and makes a new lowHowever at the low point, there is some amount of buying interest that emerges, which pushes the prices higher to the extent that the stock closes near the high point of the dayThe price action on the hammer formation day indicates that the bulls attempted to break the prices from falling further, and were reasonably successfulThis action by the bulls has the potential to change the sentiment in the stock, hence one should look at buying opportunities
The trade setup for the hammer is as follows:
A hammer formation suggests a long tradeThe trader’s entry time depends on the risk appetite of the trader. If the trader is a risk taker, he can buy the stock the same day. Remember, the color of the real body in hammer does not matter; hence there is no violation to the Rule 1. If the trader is risk averse, he can buy the stock the day after the pattern has formed only after ensuring that the day is a blue candle dayRisk takers can qualify the day as a hammer by checking the following condition at 3:20PM on the hammer day..Open and close should be almost the same (within 1-2% range)Lower shadow length should be at least twice the length of real bodyIf both these conditions are met, then the pattern is a hammer and the risk taker can go longThe risk averse trader should evaluate the OHLC data on the 2nd If it’s a blue candle, the trade is valid and hence he can go longThe low of the hammer acts as the stoploss for the trade
The chart below shows the formation of a hammer where both the risk taker and the risk averse would have set up a profitable trade. This is a 15 minutes intraday chart of Cipla Ltd.

The trade set up would be as follows:
Buy Price for a risk taker – He takes the trade on the Hammer candle itself at – Rs.444/-
Buy price for a risk averse – He takes the trade on the next candle after evaluating that the candle is blue at – Rs. 445.4/-
Stoploss for both the traders is at Rs.441.5/-, which is the low of the hammer formation.
Do notice how the trade has evolved, yielding a desirable intraday profit.
Here is another chart where the risk averse trader would have benefited by virtue of the ‘Buy strength and Sell weakness’ rule.

Here is another interesting chart with two hammer formation.

Both the hammers qualified on the pre conditions of a hammer i.e :
Prior trend to be a down trendShadow to real body ratio
On the first hammer, the risk averse trader would have saved himself from a loss making trade, thanks to Rule 1 of candlesticks. However, the second hammer would have enticed both the risk averse and risk taker to enter a trade. After initiating the trade, the stock did not move up, it stayed nearly flat and cracked down eventually.
Please note once you initiate the trade you stay in it until either the stop loss or the target is reached. You should not tweak the trade until one of these events occurs. The loss in this particular trade (first hammer) is inevitable. But remember this is a calculated risk and not a mere speculative risk.
Here is another chart where a perfect hammer appears, however it does not satisfy the prior trend condition and hence it is not defined pattern.

A hanging man can be of any color and it does not really matter as long as it qualifies ‘the shadow to real body’ ratio. The prior trend for the hanging man should be an uptrend, as highlighted by the curved line in the chart above. The thought process behind a hanging man is as follows:
The market is in an uptrend, hence the bulls are in absolute controlThe market is characterized by new highs and higher lowsThe day the hanging man pattern appears, the bears have managed to make an entryThis is emphasized by a long lower shadow of the hanging manThe entry of bears signifies that they are trying to break the strong hold of the bulls
Thus, the hanging man makes a case for shorting the stock. The trade set up would be as follows:
For the risk taker, a short trade can be initiated the same day around the closing priceFor the risk averse, a short trade can be initiated at the close of the next day after ensuring that a red candle would appearThe method to validate the candle for the risk averse, and risk taker is exactly the same as explained in the case of a hammer pattern
Once the short has been initiated, the high of the candle works as a stoploss for the trade.

In the chart above, BPCL Limited has formed a hanging man at 593. The OHLC details are –
Open = 592, High = 593.75, Low = 587, Close = 593. Based on this, the trade set up would be as follows:
The risk taker, initiates the short trade on the day the pattern appears (at 593)The risk averse, initiates the short trade on the next day at closing prices after ensuring it is a red candle dayBoth the risk taker and the risk averse would have initiated their respective tradesThe stoploss price for this trade would be the high price i.e above 593.75
The trade would have been profitable for both the risk types.

7.4 –My experience with a paper umbrella

While both the hammer and the hanging man are valid candlestick patterns, my dependence on a hammer is a little more as opposed to a hanging man. All else equal, if there were two trading opportunities in the market, one based on hammer and the other based on hanging man I would prefer to place my money on hammer. The reason to do so is simply based on my experience in trading with both the patterns.
My only concern with a hanging man is the fact that if the bears were indeed influential during the day, why did the price go up after making a low? This according to me re establishes the bull’s supremacy in the market.
I would encourage you to develop your own thesis based on observations that you make in the markets. This will not only help you calibrate your trade more accurately but also help you develop structured market thinking.
Posted by tamiltrading at 4:45 AM