Before you get thinking, the word ‘Harami’ does not stand for the word harami used in Hindi

. Apparently it is old Japanese word for ‘pregnant’. You’d appreciate the intuitiveness of this word, when you see the candlestick formation.

The thought process behind a bullish harami pattern is as follows:
The market is in a downtrend pushing the prices lower, therefore giving the bears absolute control over the marketsOn day 1 of the pattern (P1) a red candle with a new low is formed, reinforcing the bear’s position in the marketOn day 2 of the pattern (P2) the market opens at a price higher than the previous day’s close. On seeing a high opening price the bears panic ,as they would have otherwise expected a lower opening priceThe market gains strength on P2 and manages to close on a positive note, thus forming a blue candle. However P2’s closing price is just below the previous days (P1) open priceThe price action on P2 creates a small blue candle which appears contained (pregnant) within P1’s long red candleThe small blue candle on a standalone basis looks harmless, but what really causes the panic is the fact that the bullish candle appears all of a sudden, when it is least expectedThe blue candle not only encourages the bulls to build long positions, but also unnerves the bearsThe expectation is that panic amongst the bears will spread in an accelerated manner, giving a greater push to bulls. This tends to push the prices higher. Hence one should look at going long on the stock.
The trade setup for the bullish harami is as follows:
The idea is to go long on the bullish harami formationRisk takers can initiate a long trade around the close of the P2 candleRisk takers can validate the following conditions to confirm if P1, and P2 together form a bullish harami pattern:The opening on P2 should be higher than the close of P1The current market price at 3:20 PM on P2 should be less than P1’s opening priceIf both these conditions are satisfied then one can conclude that both P1 and P2 together form a bullish harami patternThe risk averse can initiate a long trade at the close of the day after P2, only after confirming that the day is forming a blue candleThe lowest low of the pattern will be the stoploss for the trade
Here is a chart of Axis Bank; the bullish harami is encircled below: 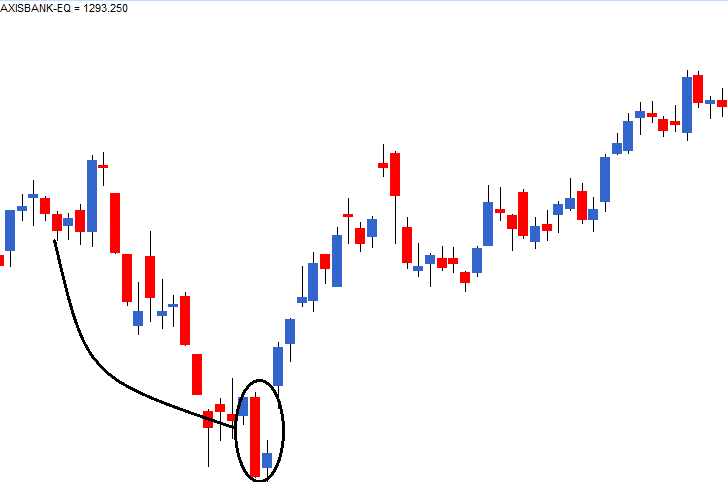 The OHLC details for the pattern are as follows:
P1 – Open = 868, High = 874, Low = 810, Close = 815 P2 – Open = 824, High = 847, Low = 818, Close = 835
The risk taker would initiate the long position at the close of P2 which is around 835. The stop loss for the trade would be lowest low price between P1 and P2; which in this case it is 810.
The risk averse will initiate the trade the day near the close of the day after P2, provided it is a blue candle day, which in this case is.
Once the trade has been initiated, the trader will have to wait for either the target to be hit or the stop loss to be triggered.
Here is a chart below where the encircled candles depict a bullish harami pattern, but it is not. The prior trend should be bearish, but in this case the prior trend is almost flat which prevents us from classifying this candlestick pattern as a bullish harami.

And here is another example where a bullish harami occurred but the stoploss on the trade triggered leading to a loss.

The bearish harami pattern appears at the top end of an uptrend which gives the trader a opportunity to initiate a short trade.

The thought process behind shorting a bearish harami is as follows:
The market is in an uptrend, placing the bulls in absolute controlOn P1, the market trades higher, and makes a new high and closes positively forming a blue candle day. The trading action reconfirms the bulls dominance in the marketOn P2 the market unexpectedly opens lower which displaces the bulls ,and sets in a bit of panic to bullsThe market continues to trade lower to an extent where it manages to close negatively forming a red candle dayThe unexpected negative drift in the market causes panic making the bulls to unwind their positionsThe expectation is that this negative drift is likely to continue and therefore one should look at setting up a short trade.
The trade setup for the short trade based on bearish harami is as follows:
The risk taker will short the market near the close of P2 after ensuring P1 and P2 together forms a bearish harami. To validate this, two conditions must be satisfied:The open price on P2 should be lower than the close price of P1The close price on P2 should be greater than the open price of P1The risk averse will short the market the day after P2 after ensuring it forms a red candle dayThe highest high between P1 and P2 acts as the stoploss for the trade.
Here is a chart of IDFC Limited where the bearish harami is identified. The OHLC details are as follows:
P1 – Open = 124, High = 129, Low = 122, Close = 127 P2 – Open = 126.9, High = 129.70, Low, = 125, Close = 124.80