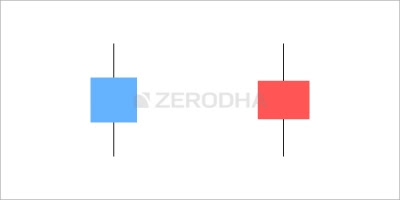 Two things are quite prominent…
What do you think would have transpired during the day that leads to the creation of a spinning top? On the face of it, the spinning top looks like a humble candle with a small real body, but in reality there were a few dramatic events which took place during the day.
Let us follow these events:
Now think about the spinning top as a whole along with all its components i.e real body, upper shadow, and lower shadow. The bulls made a futile attempt to take the market higher. The bears tried to take the markets lower and it did not work either. Neither the bulls nor the bears were able to establish any influence on the market as this is evident with the small real body. Thus Spinning tops are indicative of a market where indecision and uncertainty prevails.
If you look at a spinning top in isolation it does not mean much. It just conveys indecision as both bulls and bears were not able to influence the markets. However when you see the spinning top with respect to the trend in the chart it gives out a really powerful message based on which you can position your stance in the markets.

6.2 – Spinning tops in a downtrend

What if the spinning tops were to occur when the stock is in a down trend?
In a down trend, the bears are in absolute control as they manage to grind the prices lower. With the spinning top in the down trend the bears could be consolidating their position before resuming another bout of selling. Also, the bulls have attempted to arrest the price fall and have tried to hold on to their position, though not successfully. After all, if they were successful the day would have resulted in a good blue candle and not really a spinning top.
So what stance would you take considering that there are spinning tops in a down trend. The stance depends on what we expect going forward. Clearly there are two foreseeable situations with an equal probability:
Clearly, with no clarity on what is likely to happen, the trader needs to be prepared for both the situations i.e reversal and continuation.
If the trader has been waiting for an opportunity to go long on the stock, probably this could be his opportunity to do so. However to play safe he could test the waters with only half the quantity. If the trader wants to buy 500 shares, he could probably enter the trade with 250 shares and could wait and watch the market. If the market reverses its direction, and the prices indeed start going up then the trader can average up by buying again. If the prices reverse; most likely the trader would have bought the stocks at the lowest prices.
If the stock starts to fall, the trader can exit the trade and book a loss. At least the loss is just on half the quantity and not really on the entire quantity.
Here is a chart, which shows the downtrend followed by a set of spinning tops. The stock rallied post the occurrence of the spinning top.

Here is another chart which shows the continuation of a down trend after the occurrence of spinning tops.

So, think about the spinning top as “The calm before the storm”. The storm could be in the form of a continuation or a reversal of the trend. In which way the price will eventually move is not certain, however what is certain is the movement itself. One needs to be prepared for both the situations.

A spinning top in an uptrend has similar implications as the spinning top in a down trend, except that we look at it slightly differently. Look at the chart below, what can you see and what would be the inference? 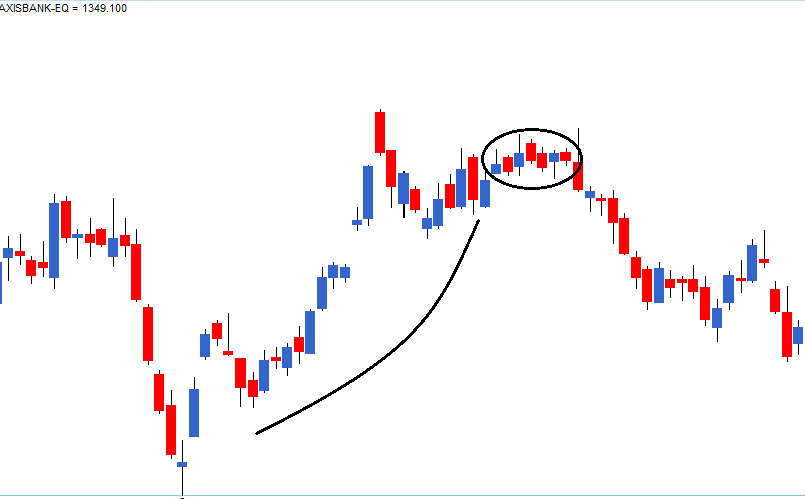 An obvious observation is the fact that there is an uptrend in the market, which implies the bulls have been in absolute control over the last few trading sessions. However with the occurrence of the recent spinning tops the situation is a bit tricky:
Having observed the above, what does it actually mean and how do you position yourself in the market?
Having said that, what should you do? The chances of both events playing out are equal, how are you going to take a stance? Well, in such a situation you should prepare for both the outcomes!
Assume you had bought the stock before the rally started; this could be your chance to book some profits. However, you do not book profits on the entire quantity. Assume you own 500 shares; you can use this opportunity to book profits on 50% of your holding i.e 250 shares. Two things can happen after you do this:
The stance you take helps you tackle both the outcomes.
Here is a chart which shows an uptrend and after the occurrence of spinning tops, the stock rallied. By being invested 50%, you can continue to ride the rally. 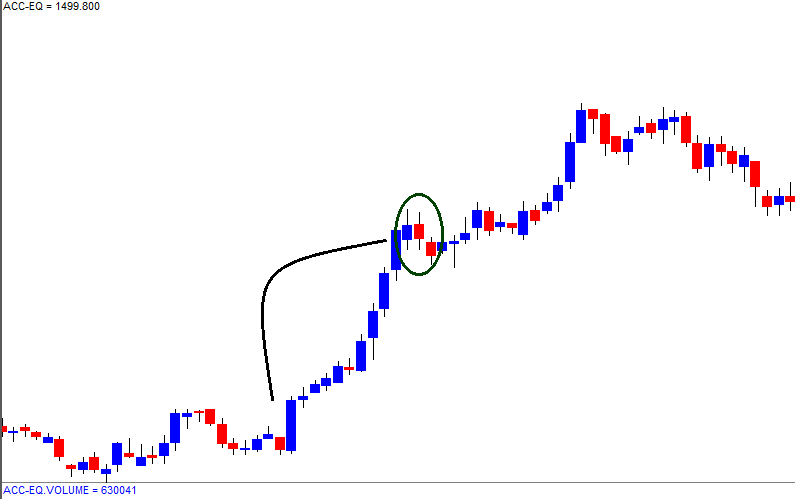 To sum up, the spinning top candle shows confusion and indecision in the market with an equal probability of reversal or continuation. Until the situation becomes clear the traders should be cautious and they should minimize their position size.
Posted by tamiltrading at 3:21 AM